There was a time when I produced this kind of thing. Some sticks have the shape of a person kicking up a leg when turned upside-down. Sturdy ones are good for making coat hangers or hat racks. Some are suitable for dancing couples. None of these have been posted yet. Stay tuned, they will be!

Anyway, early on this seemed like a good idea. The hangers are. Candlesticks and incense burners made from what could be used as kindling probably is not such a good idea! No more were made after one caught on fire. A story for another post when I find the photo of it before the fire and take a digital picture of it.

Yes, it was back when people used film and you didn’t know what the picture looked like until you sent it off and it came back in the mail. Yes, snail mail. 12-24 maybe 36 photos was the limit per roll of film and the whole process took like 2 weeks and cost more than 2 weeks of digital plans that can do all that and much more 100x better and 1000’s of times faster! 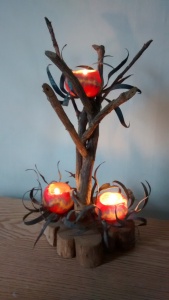